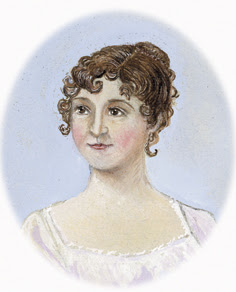 Thanks to Michelle and Linda for pointing out some more information on Miss Austen Regrets.
There is a cast listing at imdb http://imdb.com/title/tt1076240/fullcredits#cast
which highlights that there will be some great talent in this production.

Olivia Williams (Jane Austen) played Jane Fairfax in Emma (1996: Kate Beckinsale version), Greta Scacchi (Cassandra Austen) played Mrs Weston in Emma (1996: Gwenyth Paltrow version) and Phylidda Law (Mrs Austen) is a wonderful actress in her own right but is of course the real-life mother of Emma Thompson who was astounding as Elinor Daswood in Sense and Sensibility(1995)
There is a bbc press office release about the film pasted below:

Based on the life and letters of Jane Austen, Miss Austen Regrets imagines the story of the novelist's final years.

Written by Gwyneth Hughes (Five Days) the drama provides an insight into Austen's own romantic life, examining why, despite setting the standard for romantic fiction, she died having never married or met her own Mr Darcy.

Displaying all the wit which one would expect from Austen herself, Gwyneth feels that she cannot claim sole credit for the drama, commenting: "The script is very tightly based on Austen's surviving letters to her sister and to her young niece, Fanny. So I must share the credit for quite a lot of the dialogue with Miss Austen herself!

"And I must say, it's been a strange and humbling experience to feel this genius of English literature peering critically over my shoulder as I write. But I have loved every moment in her company."

Yet when asked by her young niece Fanny, played by rising star Imogen Poots (28 Weeks Later), to help her vet potential husbands, Jane's confident composure is threatened as she finds herself looking back on her own potential suitors and the choices she has made.

A chance meeting with former acquaintance Rev Brook Bridges (Hugh Bonneville – Five Days, Tipping The Velvet) sees her reflect on a marriage that never was, while when her family faces financial ruin it is revealed that it all could have been very different had she only accepted a marriage proposal from a wealthy landowner.

Speaking about her reasons for wanting to write about Austen's life, Gwyneth Hughes says:

"Everyone knows Jane Austen never married. For her millions of fans this can only be a relief, because it's hard to see how a 19th century wife and mother could have found time to write her six wonderful novels! All the same, you do wonder whether she minded – how this spinster lady felt about the absence of a real Mr Darcy in her life."

"And then I read the most extraordinary fact. Jane Austen did receive a proposal of marriage from a wealthy young neighbour. And she accepted! She actually said yes to him – till after a long night of discussion with her sister Cassandra, she changed her mind. This intriguing decision inspired the story of Miss Austen Regrets."

Directed by Jeremy Lovering, the Executive Producer is David Thompson, Head of BBC Films. The Producer is Anne Pivcevic. The Co-Producer is Jamie Laurenson.

Filming is underway and the drama will air on BBC One along with the BBC's adaptation of Sense And Sensibility."

Although this is another perspective on the romantic life of Jane, we thought that it was important to acknowledge. It is of course another speculative piece for all we know is that she accepted a marriage proposal from the only son of the Bigg-Wither family and changed her mind during the night. What thoughts were running through her mind that night we will never know…..could have been the memories of her true love for Tom Lefroy??

Overall I think that this production is very important to further increase the public awareness of Jane Austen.

:-D This is my favourite sentence by far:

"...And when her brother Henry is taken ill Jane's passions are ignited by his handsome young physician..."

I did't realise that Phyllida Law/Mrs Austen was S&Ss Mrs Dashwood! What an excellent lineup of Austen ex-pats.

I too love that line Michelle.
I think that I may have been confusing in my wording- Phylidda Law is Emma Thompson's real-life mother; i still like the link though! I adore Emma Thompson in S&S.

Oops! I have just re-read. Phylidda Law is Emma Thompson's mother! My bad.

However, I discovered something exciting! I was going to joke earlier that all they needed was one of the Miss Bates from '96 or '97 - well, close! PHYLIDDA LAW PLAYED MRS BATES IN THE 1996 VERSION!!! (Wait a minute, I'm just going to double check that...) Yes, PL played old Mrs Bates, and her daughter Sophie Thompson played MISS Bates. Such family connections. :)

!! We posted at exactly the same time. Freaky! Yes, my bad. I looked it up, and look at the other family connections! PL HAS been in a previous Austen adaptation. :)

Thanks a lot, Rachel for the neat summary! I am entertaining no less than 20 friends as I type; for there is a major meeting at my place. Will return soon, as in within 3 hours!

'Miss Austen Regrets' sounds very interesting... for me, it's going to be strange seeing someone other than Anne playing Jane, though! Hope it makes it over to the U.S. at some point -- maybe I can Netflix it? (That's how I see nearly everything these days!)

Honestly, I share the same sentiment, Meg. For me, Anne is THE Jane Austen now, as James McAvoy is THE Tom Lefroy. Yes, even if someone decides to use our findings here to make another movie of Jane/Tom and hence Tom was portrayed as a silent, shy person, that Tom would still best played by James McAvoy! (And JA by Anne!) ^_^

But I am not shutting my eyes on Miss Austen Regrets. It has the potential to be an interesting movie on its own. Besides, Olivia will play an older Austen then...