Thanks very much to 'filmforlife' on the message board at imdb for letting us know that another positive review has been written for Becoming Jane. It was written by Adam Fendelman at HollywoodChicago.com. There are also a nice selection of pics presented with the review. Here is the link: 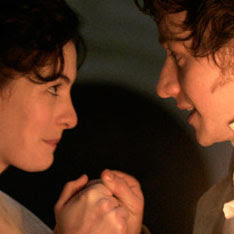 Upon browsing I also came across the website of The Film Factory and I found this link which has some film information, the trailer and a few short clips, one of which was at the London premiere of the film (some nice shots of the stars):

Rachel and folks in IMDB, thanks a lot! The review was very good, and considering it using Oscar marks as the rating, I am grateful for that. Of course, the website is not an Oscar institution, but really, the review is encouraging.

Hi Icha!
If you go to boxofficemojo.com you can see how the movie is doing. I took a look and it showed over $1 million for 100 theaters/select-opening. That seems quite promising!

Yes! ^_^ Bruisedlee from the IMDB told us about it. Very nice, eh? I hope it stays good... I've visited mojo yesterday, and hope it will be all good.

But I haven't visited IMDB today. There are some... how to say it... rather unpleasant comments on BJ, and I'm not really in a mood to read them.

But thanks, Kari! I'm working on an article about a letter, hope to post it in a few hours.