Jane Austen Quote of the Week 251

This week I am using an exchange between Mr Darcy and Elizabeth in Pride and Prejudice when discussing "the" letter in Chapter 58 (or volume 3, chapter 16). She begins:

``The letter, perhaps, began in bitterness, but it did not end so. The adieu is charity itself. But think no more of the letter. The feelings of the person who wrote, and the person who received it, are now so widely different from what they were then, that every unpleasant circumstance attending it ought to be forgotten. You must learn some of my philosophy. Think only of the past as its remembrance gives you pleasure.''


``I cannot give you credit for any philosophy of the kind. Your retrospections must be so totally void of reproach, that the contentment arising from them is not of philosophy, but, what is much better, of innocence. But with me, it is not so. Painful recollections will intrude which cannot, which ought not, to be repelled. I have been a selfish being all my life, in practice, though not in principle. As a child I was taught what was right, but I was not taught to correct my temper. I was given good principles, but left to follow them in pride and conceit.


I have come across this a few times as it is such a turning point in the novel but the bolded line is what always sticks out for me. Is Elizabeth speaking out of innocence because she has not experienced pain previously? Or is she speaking out of wisdom because to refer to the past with pleasure (even if focussing only on the positive elements) will surely make for a more pleasant present and outlook into the future. 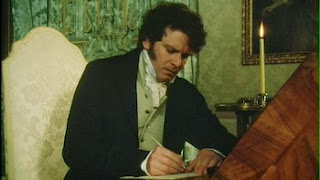