Jane Austen Quote of the Week 201

I have been dipping into Northanger Abbey and one paragraph made me chuckle - Mrs Thorpe and Mrs Allen have just been reacquainted in Bath and in chapter 4 of the novel they are catching up.


"Mrs. Thorpe, however, had one great advantage as a talker, over Mrs. Allen, in a family of children; and when she expatiated on the talents of her sons, and the beauty of her daughters, when she related their different situations and views — that John was at Oxford, Edward at Merchant Taylors’, and William at sea — and all of them more beloved and respected in their different station than any other three beings ever were, Mrs. Allen had no similar information to give, no similar triumphs to press on the unwilling and unbelieving ear of her friend, and was forced to sit and appear to listen to all these maternal effusions, consoling herself, however, with the discovery, which her keen eye soon made, that the lace on Mrs. Thorpe’s pelisse was not half so handsome as that on her own." 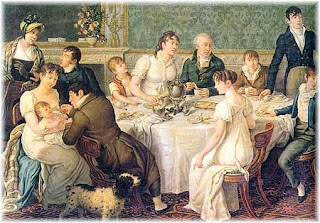 I dont know about you but I so often find myself feeling the same as Mrs Allen. It may be about different subject matters but often there is always a way to make yourself feel better about life!