Jane Austen Quote of the Week 196

"I have bought your locket, but was obliged to give 18s. for it, which must be rather more than you intended. It is neat and plain, set in gold."

The quote was part of Jane Austen's letter to Cassandra on Monday, 24 May 1813, written from Sloane St. It was brought to my attention by way of this Daily Mail article about an unknown ring that once belonged to Jane Austen herself (no, I don't think the above quote was about the ring. It was about a locket. But still...). 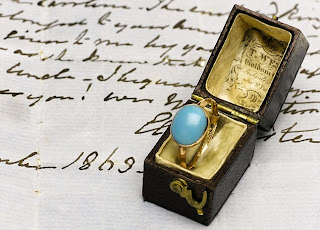 The gold ring is thought to mount a blue odontolite (bone turquoise) stone. Apparently, Cassandra Austen passed the ring to their sister-in-law Eleanor (who married to Henry Austen), presumably after Jane passed away. Eleanor then passed it to Caroline Austen, who then passed the ring to Mary (the daughter of James Edward Austen-Leigh. Etc etc etc. The ring has been in the family ever since, for over 200 years. This is the direct quote from the article:

A note that accompanies the sale of the ring explains how Austen’s sister-in-law Eleanor Austen had been given it when she became engaged to the writer’s brother Henry.

She wrote: ‘My dear Caroline. The enclosed Ring once belonged to your Aunt Jane. It was given to me by your Aunt Cassandra as soon as she knew that I was engaged to your Uncle. I bequeath it to you. God bless you!’

This was the same year that Caroline’s brother, James-Edward Austen-Leigh, wrote ‘A Memoir of Jane Austen’ with the help of his sister.

Caroline never married and the ring passed to James-Edward’s daughter Mary and it has continued to be passed down the family until now.


The ring will be auctioned by Sotherby's on 10 July 2012. Anyone interested?


Picture: The simple yet beautiful blue and gold ring of Jane Austen's