Another interpretation on the 'friend' in letter November 17, 1798 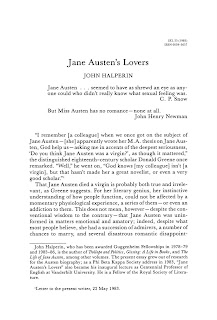 I just re-read John Halperin's article (Jane Austen's Lovers), and found out that he suggested that the 'friend' that wrote to Mrs. Lefroy was NOT Tom Lefroy, but a Rev. Samuel Blackall whom Jane met in December 1797. For the article clearly stated that the analysis was based on deductions, I feel that I do not need to amend my earlier post re: Jane Austen's letter November 17, 1798. I just think that another reference would be beneficial for comparisons, and of course, feel free to interpret the documents. Below is the excerpt of Halperin's interesting paper (p. 723). Although I still believe that the 'friend' referred to Tom Lefroy instead of Samuel Blackall, I would of course welcome constructive feedback on this particular letter and additional information of Mr. Blackall.

About Jane Austen's next suitor there is more information, though much of what follows here is the result largely of guesswork and deduction; his name is not mentioned in any surviving letters written by Jane Austen. During the Christmas festivities at Steven- ton in 1797, just after the novelist's twenty-second birthday, she met the Rev. Samuel Blackall, a Cambridge don who was then paying a visit to the Lefroys. He seems to have fallen in love with Jane Austen -or managed to convince himself that he had done so. Four years older than she, Blackall, great-grandson of the Bishop of Exeter in the time of Queen Anne, became a Fellow of Emman- uel College, and was ordained in 1794. In later years (from 1812 onwards) he was Rector of North -not "Great," as Jane has it in a letter -Cadbury in Somersetshire.

In the autumn of 1798, nine months after meeting the novelist in Hampshire, Blackall wrote to Mrs. Lefroy that he wished to improve his acquaintance with the Austens, and especially with Jane -"with a hope of creating to myself a nearer interest. But at present I cannot indulge any expectation of it." Mrs. Lefroy showed Blackall's letter to Jane, who wrote of it to Cassandra: "This is rational enough; there is less love and more sense in it than some- times appeared before, and I am very well satisfied. It will all go on exceedingly well, and decline away in a very reasonable manner." It is clear from this that Blackall had made his feelings known to her the previous year, and that she had made it equally clear to him that his feelings were not reciprocated. It was less than three years since lively Tom Lefroy had disappeared, and the ponderous Blackall was hardly the man to take his place in Jane Austen's affections. Jane tells Cassandra that Blackall will not come into Hampshire this Christmas (1798), "and it is therefore most probable that our indifference will soon be mutual, unless his regard, which appeared to spring from knowing nothing of me at first, is best supported by never seeing me."" This was a one-sided romance. Blackall's name is never given; he is referred to by the novelist only as a "friend."

As Jane predicted, Blackall soon ceased his attentions. Years later, in 1813, he married. Hearing of this, and of his acquiring the Somersetshire living, the novelist wrote complacently to Cassandra of Blackall's "succeeding . . . to the very Living which we remembered his talking of and wishing for." She adds: "He was a piece of Perfection, noisy Perfection himself whom I always recol- lect with regard." "Pictures of perfection," Jane Austen told one of her nieces a few months before her death, "make me sick &wickedn her characterization of Blackall here should be seen in that light. She could never summon up more than "regard" for him; indeed, she seems to have found him pompous and didactic. When she goes on in her 1813 letter to Cassandra to describe what she hopes for in Blackall's wife, we may see a little more of what he might have been like: "I would wish Miss Lewis to be of a silent turn & rather ignorant, but naturally intelligent & wishing to learn; -fond of cold veal pies, green tea in the afternoon, & a green window blind at night." So much for Blackall. It would seem from this that he was not seeking intellectual companionship in a wife, and this may have been another reason why Jane Austen could not bring herself to accept him.

Whether the friend referred to is Tom Lefroy or Samuel Blackall is immaterial in relation to the novels of Jane Austen. This is because Jane Austen did not write them. The true author, as I prove in my recently published book "Jane Austen - a New Revelation" was her cousin Eliza de Feuillide, who could not publish them under her own name as she was the secret illegitimate daughter of Warren Hastings. She was married twice, had one son and several miscarriages.

One of the problems with presenting Jane Austen as the author of the novels is that she obviously did not have the experience of love, sex or marriage to write the novels (never mind that she also only had two years basic primary school education). It was therefore necessary to invent a love life for Jane Austen where none existed. Jon Spence in his biography "Becoming Jane" attempts to do this by creating a fictitious love affair between Jane Austen and Tom Lefroy which never existed in real life.