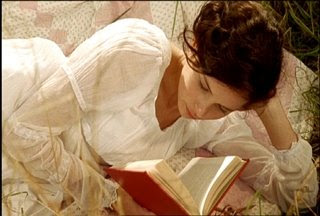 This week my quote is from Northanger Abbey. Catherine and Henry are discussing Henry's brother's flirtations with Catherine's brother's fiancee. (yikes!) Henry says:

'No man is offended by another man's admiration of the woman he loves; it is the woman only who can make it a torment.'

This was one of those statements that made me stop reading, and reread it. It just demands a second reading! Everytime I read NA I stop at this quote, so I thought it belonged here on the blog. I don't have a massive opinion about it, I just wonder at it!

There is something lovely, I think, about hearing a masculine voice in this way. It speaks of such pride and love and tenderness, and I can fully believe Henry Tilney feeling this way about Catherine. Such a beautiful quote. It always makes me smile.

Pic: Felicity Jones as Catherine Morland from: The Lit Connection

Ahh... Such a very lovely quote, Michelle, thanks a lot dear! I really have to re-read it at least twice to believe that it is what it's written. And my conclusion is... the man (Henry Tilney?) was truly a gentleman. He could be jealous of the other men who looked at his beau (Catherine) with admiration... but he chose not to. He chose to think, well, that's a very natural thing to do, for my dear girl is very lovely indeed. Surely many men would fall for her.

I'd say it's a healthy attitude. It indeed invites a smile.

So it also goes with the second sentence. So true.

That really is a great pick for quote of the week! And as surprising as some may find the first clause, it is the completion of the maxim in the second clause by which JA's profound understanding of human nature again hits the mark.

Icha - it is lovely, and as a woman, it's what I secretly hope a man would think, you know? That his girl is such a goddess that it is only natural she would be admired, but it is her single heart for him that keeps it pure, etc. Love it.

Bilbo - you're so right! Jane at her finest. It's an extraordinaryly deep quote, and it continually fascinates me.

The structure of the quote makes me think of Oscar Wilde; i.e.: A man's face is his autobiography. A woman's face is her work of fiction. That is, an opening truth, and then a devastatingly enlightening truth for that 'aha' moment. And the second thought is usually blindingly 'obvious', but previously unacknowledged. Do you know what I mean?