Jane Austen Quote of the Week 158 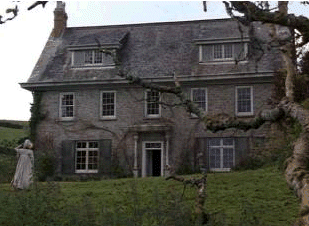 This week's quote is taken from Sense and Sensibility, the first paragraphs of Chapter 6 when the Dashwoods moved to Barton Cottage in Devonshire.


THE first part of their journey was performed in too melancholy a disposition to be otherwise than tedious and unpleasant. But as they drew towards the end of it, their interest in the appearance of a country which they were to inhabit overcame their dejection, and a view of Barton Valley, as they entered it, gave them cheerfulness. It was a pleasant, fertile spot, well wooded, and rich in pasture. After winding along it for more than a mile, they reached their own house. A small green court was the whole of its demesne in front; and a neat wicket-gate admitted them into it. As a house, Barton Cottage, though small, was comfortable and compact; but as a cottage it was defective, for the building was regular, the roof was tiled, the window shutters were not painted green, nor were the walls covered with honeysuckles. A narrow passage led directly through the house into the garden behind. On each side of the entrance was a sitting room, about sixteen feet square; and beyond them were the offices and the stairs. Four bed-rooms and two garrets formed the rest of the house. It had not been built many years, and was in good repair. In comparison of Norland, it was poor and small indeed!- but the tears which recollection called forth as they entered the house were soon dried away. They were cheered by the joy of the servants on their arrival, and each for the sake of the others resolved to appear happy. It was very early in September; the season was fine; and from first seeing the place under the advantage of good weather, they received an impression in its favor which was of material service in recommending it to their lasting approbation.

The situation of the house was good. High hills rose immediately behind, and at no great distance on each side; some of which were open downs, the others cultivated and woody. The village of Barton was chiefly on one of these hills, and formed a pleasant view from the cottage windows. The prospect in front was more extensive; it commanded the whole of the valley, and reached into the country beyond. The hills which surrounded the cottage terminated the valley in that direction; under another name, and in another course, it branched out again between two of the steepest of them.

I had been looking for a house to rent the last two weeks. It's rather hard to find a decently priced house for rent in south Bali, everything seems to be excessively priced these days. I have started my work since 1 July, but I would not receive my salary until the end of the month (unfortunately, we don't have fortnight salary system in Indonesia). I have some savings for housing, but I cannot indulge on the more expensive options usually targeted for foreigners.

Having said that, I found a nice house just last Tuesday, situated by the paddy field. I have signed a contract last Saturday. It's every bit a scary adventure, for house renting in Indonesia is not protected by rigorous law. But the land lord and lady are a nice couple, so here's hoping that I will like my stay there. I signed the contract for two years, for I know how hard it is to get a good house in that price these days. Plus, I plan to start buying/building a house by the second half of 2012, so I definitely need a place to stay until then.

How about you, dear friends? Have any stories about house-renting (or house-buying) you can share with us?