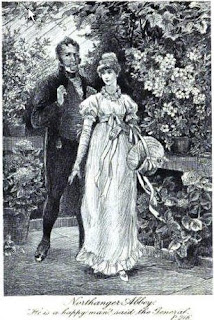 From Northanger Abbey we have a two part definition/explanation/description of ‘friendship’.

‘Friendship is certainly the finest balm for the pangs of disappointed love.’

The progress of the friendship between Catherine and Isabella was quick as its beginning had been warm, and they passed so rapidly through every gradation of increasing tenderness that there was shortly no fresh proof of it to be given to their friends or themselves. They called each other by their Christian name, were always arm in arm when they walked, pinned up each other’s train for the dance, and were not to be divided in the set; and if a rainy morning deprived them of other enjoyments, they were still resolute in meeting in defiance of wet and dirt, and shut themselves up, to read novels together.

Such has been the friendship that has blossomed between the managers and contributors in this Becoming Jane blog. However, our ‘disappointed love’ was in the Jane Austen/Tom Lefroy affair. Of course, we called ourselves by our Christian names. We have exchanged personal confidences and pictures so we know each other as intimately as can be done via the internet. Also, even though we are separated by many miles and busy lives we do read novels together, as well as the biographies of Jane Austen and Tom Lefroy, of course. I might add that this friendship includes our readers who have posted their comments and shared their writings. I am continually amazed that such friendships can be made world wide!

To quote Icha from a previous ‘quote of the week’ HERE:

'But, just to recall the friendships we have shared in this blog, some of them getting to sisterhood level even…'

Strangely, by coincidence, I must remark on the happenstance of choosing ‘friendship’ this particular week because I chose Northanger Abbey at random and noticed my previous highlighting of the above quotes. Those quotes captured my attention because the inspiration only came to mind a couple of weeks ago that I have two ‘particular’ friends who needed to be most gratefully ‘Thanked’. The occasion to do so occurred last weekend when I flew to New Jersey to attend the wedding of my best friend’s son. While there, I made a heartfelt presentation of my gratitude to my dearest friend and her husband for their care and concern through the past 43 years for myself in the times of my troubles. Needless to say, there were tears and hugs. Next weekend I will have the opportunity to express the same gratitude to my dearest sister and brother-in-law for their care and love, in spite of the fact that when we were growing up she was the most aggravating ‘little sister’. Just as Catherine’s friendship grew, so did ours as we became adults.

Let us make this week “Thank a Friend” week to show your own gratitude. Which brings to mind, I have a few other friends who should be remembered with a “Thank You”! We are grateful for all our ‘friends’!

Next week I will continue with the rest of the ‘Friendship Paragraph’ which discusses “Novels”!

Pic: A classic Northanger Abbey picture from this site

Oh my God, dearest Linda... I'm sooo glad that I've found you and the ladies at Team Jane here as my friends. And of course other ladies and gents here, they're so nice to befriend with.

Often life gets so rough, and - at the risk of being imbalance here - I found myself safe and sound, surrounded by my 'sisters', near and far, and most of them are not even genetically connected with me. I missed many of my sisters that I found along the way (including you Linda), and I hope that they are all just fine and blessed...

The internet is a wonderful thing. I met my hubbie through the internet! Never thought it would last of course, but here we are, sex years later, married and parents to the most beautiful boy in the world.

I thank my lucky star everyday for the people that are in my life. Now I'm going to remember to tell them.

Thank you Linda for the excellent choice of quotes!

I don't personally know any of you ladies here, but our love of Jane brings us together in friendship.

What wonderful quotes from NA. Thank you for a wonderful post - as always!

These are beautiful quotes, Linda dear -- I can't stop smiling when I think how dearest Jane brings us all in friendship every day, every week, every year (almost 18 months for me) on this wonderful place. A heartfelt 'Thank you!', my dear friends, for creating it and for your admirable dedication to this blog – it's very much appreciated and treasured by many hearts you fill with joy, I assure you.

...and I can not leave without reminding you about Jane's 'Irish friend' - today my thoughts are with you, Mr Lefroy, more than other days --wishing you all an 'exceeding' Happy St Patrick's Day!

And just to add that yesterday I received an email from my house mate... she's like a lil sister to me now... begging me to go back home and finish my field work here... funny how a friendship or sisterhood starts... Me and her, we started rather rough, hehehe... but now it's nice to have her around.