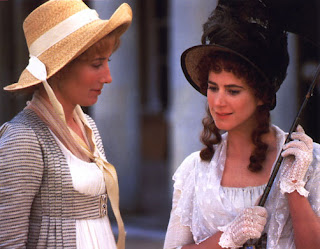 This time, as promised to find a quote from a book other than Persuasion, I picked Sense & Sensibility. Funny enough, it’s about keeping a promise as well.

Sense & Sensibility Chapter 37 (Penguin 2003, p. 246), after Marianne found out that Elinor had known about Edward Ferrars’ engagement with Lucy Steele for solid four months and told no soul about it because Elinor had promised Lucy to keep it as a secret.

“By feeling that I was doing my duty. – My promise to Lucy, obliged me to be secret. I owed it to her, therefore, to avoid giving any hint of the truth; and I owed it to my family and friends, not to create in them a solicitude about me, which it could not be in my power to satisfy.”

“I have very often wished to undeceive yourself and my mother,” added Elinor; “and once or twice I have attempted it; - but without betraying my trust, I never could have convinced you.”


Now, was Elinor not an amazing woman? Time and time again, it has been proved to me that keeping a promise is so hard! I often kept my promise well enough, but some others (particularly about deadlines) were barely kept, making me ashamed of myself.

Not to mention a certain incident that involved Rachel and I and another girl that failed to keep her promise and even lied about it… (the girl is outside this blog, of course). Poor girl, we knew she lied and she still kept fabricating the facts so that we thought she told the truth.

Oh well. Note to self: always try to be honest and keep the promise.

Oh yes, where I come from there is an old saying, "Honesty is the best policy". I do try my best to follow that advice whenever possible. ;-)

This is just another example that Miss Austen has given us to live by. She has stored up so many treasures for us.

PS - Oh, I just noticed that I can choose to not be "Anonymous" anymore. I can use my "Name/URL" Whee! I'm too old to understand all those other options. Sigh.

Yay! You're not anon anymore!

Elinor os a model of self control! IOdon't know if I could do that when it comes to close family members. Maybe it is too extreme, Think of the benefit Eliza Bennet had confiding in Jane. But then, even thought she was told something confidentially, she wasn't made to promise to keep a secret. Maybe that is what we should be wary of.

Lynnae, I agree with you actually :-P

I mean, I always try to keep my promises (ack! Haven't met the deadlines for supervisors!)... but I sometimes have to tell my secret (mine, not others who confided in me) to one of my closest friends who I know will not spread the words to others. Hence... I admire Elinor for that. Really true to her words...

I understand Elinor as well, though. I mean, she wouldn't even confide in Marianne that she still loved Edward, let alone bursting out Lucy's secrets. That's tough.

Yes, Elinor is a model of trust also.....I know I would love her as a friend or a sister. You could trust her implicitly.