My quote this week is from Persuasion, Chapter 24: 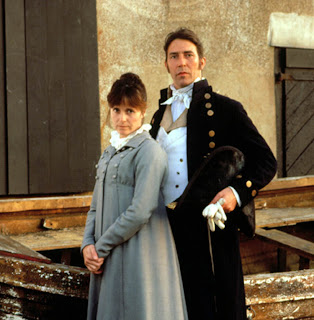 Who can be in doubt of what followed? When any two young people take it into their heads to marry, they are pretty sure by perseverance to carry their point, be they ever so poor, or ever so imprudent, or ever so little likely to be necessary to each other's ultimate comfort. This may be bad morality to conclude with, but I believe it to be truth; and if such parties succeed, how should a Captain Wentworth and an Anne Elliot, with the advantage of maturity of mind, consciousness of right, and one independent fortune between them, fail of bearing down every opposition? They might, in fact, have borne down a great deal more than they met with, for there was little to distress them beyond the want of graciousness and warmth. Sir Walter made no objection, and Elizabeth did nothing worse than look cold and unconcerned. Captain Wentworth, with five-and-twenty thousand pounds, and as high in his profession as merit and activity could place him, was no longer nobody. He was now esteemed quite worthy to address the daughter of a foolish, spendthrift baronet, who had not had principle or sense enough to maintain himself in the situation in which Providence had placed him, and who could give his daughter at present but a small part of the share of ten thousand pounds which must be hers hereafter.

Pardon me for sounding ‘preachy’ to the younger generation, but today, Jan. 30, is my 68th birthday, and what a horrible day it was. Four sick people in the house to nurse and me just getting over a siege myself and feeling rather poorly. We decided to postpone my celebration till everyone was feeling better and the ice storms had melted so visitors could travel.

My quote was brought on by the wedding plans of my dear friend’s son. I thought what Jane had to say was true and appropriate. She gives us, in the nicest way, what we shouldn’t do, and then gives us an example of how it should be done via Anne and Wentworth. I only wish I had seen this quote some 39 years ago. She has included so many truths that we really have to pay attention to catch them. So ends today’s sermonette.

Dearest Linda, thank you SO MUCH for your very lovely quotes! Can't believe how many beautiful passages and advices Jane gave us through Persuasion...

And HAPPY 68th BIRTHDAY for you! My oh my... you do live your life well, don't you My Lady? Honoured to know you, darling... Hopefully everything is much better for you now... though I have to say that my life has been VERY hectic as well!

I, being of the "younger generation", thank you for your sermonette! :)

I hope you and yours feel better soon and the weather clears so that birthday celebrations can commence!

I hope you had a wonderful birthday dear linda. And I trust that you are all well again now? I do hope so.
And thanks for the quote. As Icha said, isnt Persuasion just a wondererous gift to us all......

Happy Birthday, dearest Linda!!
"In the first place I hope you will live twenty-three years longer. Mr. Tom Lefroy's birthday was" also this month, on January 8 (about 233 years ago) and I couldn't stop thinking these days about Jane and that special year 1796, when they "had an exceeding good ball". Please correct me if I'm wrong, but I think no other ball has been described in her surviving letters with more enthusiasm; there were other good balls in the following years bun non "exeeding good".

I love the choice of your quote and the '95 adaptation of Persuasion (Amanda Root/Ciaran Hinds) is my favorite too... I know, Icha will be shocked, but not even the charming Mr RPJ wasn't able to replace my first love :))

Hope you feel better already and all your wishes will become true.

Lots of Hugs &
Infinity of Love

we are feeling a bit under the weather our whole little family. Poor Éomer is coughing.

Hugs and kisses from Maria and family

ps. chapter 39 of I remember love is finally up! ds

Thank you for the link, Maria. I've read the Hamlet (Facebook News Feed Edition) too.
I was "excessively diverted" : -)) really needed a good laugh as I'm also not feeling very well these days – my son and I still battling a very stubborn cold/flu ...for the past few weeks is all coughing and headaches and tea-soup parties every day of the week :) :(

Dearest Linda - happy belated birthday! I'm sorry your household is unwell and I hope that you beat the winter blues quickly so that you're able to celebrate your birthday in pomp and style and FUN!

Thank you for your beautiful Persuasion quotes, and for your words of experience to our young generation. It is what we need - to be blessed with the voice of life experience, and this is what dear Jane passes on to us as well.

I am excited - I have Persuasion in my coursework this year - so I will be spending a lot of time with it, x6 or so reads, and your love for the novel has reignited mine. Thanks, Linda!

Dear Maria - I never got to congratulate you on the birth of your little peanut - CONGRATULATIONS to you and your husband on the arrival of Éomer!!! I adore the name - what lovely connotations it has. :) :) How is he doing?

Michelle-> thank you dear. We are doing better now, well me and Éomer that is, my hubbie is very ill indeed. He's currently tucked in on the couch watching telly and feeling very sorry for himself. Éomer is growing by the day now! Seriously, I can't keep up! ;) Six weeks tomorrow!

Hugs and kisses from Maria and family